I’m too late for the annual review 2017. Crap! There was simply too much to eat (and drink) over the holidays. I just couldn’t pull myself together. Many bloggers who think highly of themselves summed up the past year in an entertaining way. For example, Tim Herbig talks about his experiences as a speaker or Büronymus about her experiences with superheroes. But this blog is supposed to be about the future.

So I thought maybe I should write down my intentions for the new year instead. That seems to be also quite popular. I found the OKRs of Tobias Leisgang or the Reset of Hendrik Epe very refreshing. Those could have been good examples to follow. But somehow I couldn’t agree with myself on the right goals. For a while I thought about aiming for 100,000 Twitter follower. But that’s stress. Suddenly you have to worry about what you write. You don’t want to tick someone off or lose them entirely..

And then I suddenly had a great idea. I’ll simply write the Annual Review for 2018 with all my very personal highlights to come. This is the future. That’s retrospect. And I’m guaranteed to be the first. And I only need to check them off month after month. And around Christmas I’ll just repost the article. I will have saved myself tons of time and effort. Two birds with one stone. I could give myself a medal for this idea alone.

Right now, while I’m writing this, I would call this my first highlight in 2018 right away. But for the sake of completeness: there were already some highlights in 2017 which I was quite proud of. For example, the article on “Time is the new money”. A pretty personal travelogue about our very first ever caravan trip. Or a small but nice summary of the Product Management Festival in Zurich, where I was allowed to act as a speaker for the first time.

But as you’re about to see, 2018 will be even better. It is not so easy to predict the actual number of highlights for 2018. But I strongly assume that there will be six of them. Almost half a highlight per month. Less would be a bit boring. And that’s all I need at my age. So welcome to my view from the future back into the… um…. Future.

My first highlight in 2018 was the decision to write this blog in two languages. Everything is becoming more and more global. Actually, I wasn’t planning to. The time for writing was already very limited. From 10:00 pm until the Club Mate stops working. And then translate. No, really not.

So why write for only about 100 million German-speaking readers (yes, in the Alps a few potential fans speak German as well) when you can write for a few billion with just a couple of extra clicks. Thanks to deepl: Think big.

When I launched the blog futureproofworld. com together with Andreas Ilg in March 2017, my first article was called “NewWork, WhyWork, IWork – Application for Employee of the Month“. At that time I had about as much an idea of the German #NewWork scene as I had of how to choose a catchy blog title. At least the former has definitely changed in the last two years (i. e. since March 2017).

By 2017, I had already started the first working out Loud Circle at etventure with a few highly motivated colleagues. For those who have never heard of #WOL for some inexplicable reason, it has nothing to do with open-plan offices, even if the name suggests it. If you want to know more about it, check out the #WOL-Website or just have a look at John Stepper on Twitter.

The blog, WOL, social media, conferences. All this has led me to meet a lot of interesting people about #NewWork. Andreas Zeuch of the “Unternehmensdemokraten”. Or Klaus Burmeister from the d2030 initiative. Or Winfried Felser from (under which flag do you actually network, Winfried?). Or Bianka Groenewolt and Tobias Leisgang from the Blogging Out Loud Circle.

Speaking of conferences: after the NWX18 was sold out within a few weeks despite steep prices, I visited the “Newest of Work – Unconference 2018” initiated by Hendrik Epe in early autumn. That was definitely a highlight. A good mix of experts, bloggers and real people. Keynote speeches, exchange, critical panels and a roof terrace. The ticket price could be defined by every visitor and the whole team of organizers had green T-shirts with the imprint “Elitist Sh17! I’m really looking forward to the “NoW-U 2019”. I strongly assume that I will have a speaker appearance with at least one radical thesis.

Planted a Tree! Raising a Child! What’s missing? Right! The blog has shown that what I’m writing obviously interests more people than just the first-degree relatives. So I started thinking seriously about books. Not in the sense of: Hmm, now maybe I should read a whole book! but more in the direction of: Can I really get more than 2,000 words to a topic of an evening’s length in a more or less appealing way?

But in order to spare my family, the readers and my own ego the failed 1,000 page epic, I gratefully took up the request of Andreas Schiel to participate in a book project on the topic “Digitization and Mankind”. Since I deal with digitization in my work life on a regular basis and have been proven to be a human being (according to the Motherboard, this can no longer be assumed to be unrestricted for written texts these days), I considered myself sufficiently qualified for the task.

In the end, a very entertaining and varied anthology came onto the market. Many interesting people have contributed to this, such as Conny Dethloff and Saskia Dörr. Unfortunately, I can’t remember exactly how exactly the (very good) ebook published in the summer of 2018 was called. But you can google it.

The unbelievable success of this publication has now led me to the conclusion that I would like to implement a more extensive project on the subject of “Beautiful New Working World”. Ideally in collaboration with inspiring people. Ideally also beyond the borders of Germany. Maybe even another format. A illustrated book? Or something interactive. I already have some ideas. I’m thinking about it during the holidays. And then I’ll come back to that at the beginning of 2019.

After I took it up a notch and almost became visionary. For quite some time now, the rather steep thesis that NewWork is somehow related to NewLiving and NewSociety has been buzzing around in my head. It could indeed be that our beautiful new working life has an effect on the rest of our lives, couldn’t it?

Already in my 7 theses on the future of work as part of the intrinsify.me Bloggingspree in November 2017 I had taken up the topic of co-living. In 2018, that didn’t let go of me. Interestingly, both Mark Poppenborg of intrinsify.me and Simon Berkler of the Dive had dealt with the subject more or less sporadically. There must be something to it.

And so we once sat down with a white wine cooler and a fruit salad from the region and let our imagination run wild. How to bring New Work, Regen Villages, Villages 3.0, Co-Living and the digital transformation together as part of an extensive experiment.

Nothing’s ready to be said. Everybody’s busy. But I’m telling you, this can be big. I would be very pleased if we could put at least some of the ideas into practice in 2019.

Well ok. Finally a highlight, which has nothing to do with work. I don’t want to be suspected of being a NewWorkaholic. After my most successful article in 2017 was a little brainstorming about why the new cosmopolitan party “Demokratie in Bewegung” could actually make it to the Bundestag (which unfortunately didn’t work out), my personal blog highlight in 2018 was the article on tolerance.

The title “Ein Herz für Nazis” (A Heart for Nazis) was quite provocative, I must admit. And the desire for an open, communal coexistence might be a bit too naive. Maybe that’s why it has attracted a lot of attention. In general, I was quite proud of this contribution. In my opinion, the blogpost was well researched, personal, critical and well timed. But some comments have made me doubt whether I should continue with all this. I’m not really into Trolls and Hate Speech. That’s so 2017.

On the other hand, however, it has also led to the fact that I myself had to deal very critically with my own understanding of tolerance. What do I have to accept? What can be accepted? And what is absolutely unacceptable. In the end, there was also some very positive feedback as well. So I continued writing, after all. With some less controversial topics however.

And that brings us to the last big highlight. Hmm. Work again. Somehow this seems to be the common thread in 2018. Oh well. It can’t hurt. Such a common thread.

etventure was acquired by the auditing company EY at the end of 2017. No matter from which angle something like this can be viewed with complete scepticism. A company acquisition like that can come with various downsides. Buying a company is nothing like buying a bike or such, that can be returned after 14 days if the wheels don’t run smoothly.

But in retrospect, things went better than expected. It is one thing to talk about coprorate meets startup, but to do actually go through the entire process requires a lot of understanding, tolerance, openness and good will on the part of everyone involved. For me personally, the EY Claim:”Building a Better Working World” has provided a positive, curious basic attitude from the very beginning. It was a good place to start.

And so at the beginning of the year, a small group of dedicated and curios employees from very different areas joined forces at etventure to find out how we can help shape the Future of Work. With the EY Beacon Institute, which deals intensively with so-called Purpose-Driven Organizations, we now have a promising touchpoint for this topic in our own ranks. This resulted in some very exciting experiments in 2018, about which we will have reported extensively. Hopefully we will be able to take even greater steps here in 2019.

What we work and how we work will change radically in the future. Robots don't care about overtime compensation, minimum wages and pension rights. So the most important question twill be: why are we going to work? Click To Tweet

Back to the future

So people. Who would have thought that so much would have happened in 2018? By the way, there surely have been other great events. The island vacation with my family. The Product Management Festival 2018, Magic Cleaning. Great encounters. Exciting books. My daughter’s first hockey tournament. The barbecue party at -5 degrees. But who knows exactly what the future will bring?

PS: I want to add a small resolution for 2018 after all. In 2017 I wrote relatively unplanned about everything I could think of and didn’t give much thought to style, tone, length or content. I would like to take a more targeted approach in the future. If you are interested in this unconventional excursion into the near future, please let me know or better let others know. If this article finds more than 2,000 readers (which would be the new best), then I will make a video version of it (regardless of what it looks like). 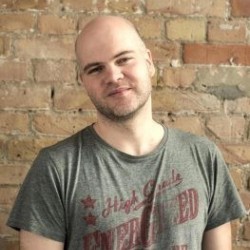 Latest posts by Gregor Ilg (see all)
The (first) annual review of 2018 – Looking back at the future
Tagged on: Society 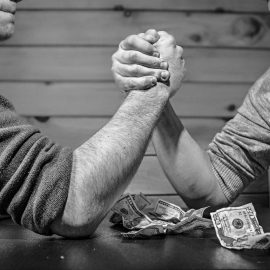 Fair salary for all! – A #NewPay thought experiment 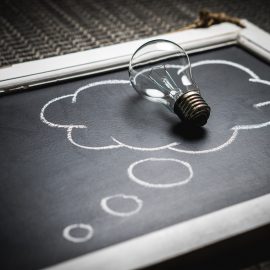 What if…? Blog parade for a completely different future